The Minister of State for Energy and Water Resources, Dr Basile Atangana Kouna has just paid a business visit to the Songloulou Hydroelectric Plant.

The MINEE was at the head of delegation composed of officials of the electricity sector Moussa Ousmanou, GM Rural Electrification Board, Victor Mbemi Nyankga, GM SONATREL, and Mr Zangue, EDC Representative.
According to the Energy boss, the purpose of their visit was to evaluate a three-year emergency plan for the rehabilitation of the Songloulou hydroelectric facility.
Basile Atangana Kouna and his delegation went round the facility, in a bid to appraise the performance of its various compartments: storage dams, spillway, controls, units, head gates, penstocks, transformer substations… They assessed the completed or ongoing projects, for instance on passage 5 where they met Fouré Lagadec Cameroun company employees busy at work. Here, “the work involves changing the chains, cogwheels, swivel joints and replacing the water stop of segment gates”, explained Hamadou Bivoung, Eneo Generation Director.
According to amendment n°2 of the Concession Agreement signed in August 2015, Eneo has taken the commitment to execute a three-year emergency plan aimed at making the Songloulou hydroelectric plant more secure for a financial package of CFAF 11 billion.
According to Eneo Cameroon General Manager, the Songloulou plant is a crucial lifeline to Cameroon. “Without this plant, 60% to 65% of the country would be in darkness. Thus, it is important for this power plant to function at its best. What is actually being done under the three-year plan? The projects have been divided into five batches. Batch 1, which involved emergency auscultation investigation, ended last 27 May. Batch 2 on additional auscultation investigation is underway. As for batch 3, the improvement of the monolith and sealing of cracks, the tender has been launched, and bids have been received but are yet to be opened. As concerns electromechanical work on the spillway, the necessary teams have been dispatched to the field. The three-year plan has been launched and is progressing satisfactorily”, observed Joël Nana Kontchou. “With regards to cracks, experts say, though an eyesore, their presence does not undermine the stability of the plant. What happened in Songloulou is not peculiar to Cameroon, as experts say the same phenomenon occurred at ALCALI REACTION in Canada and in Pakistan, as a result of the quality of granular material used in the concrete”, he reassured.
Besides the three-year plan, Eneo is also executing other projects, valued at CFAF 4.7 billion, for more functional reliability of the Songloulou facility.

For the Energy minister, the 25 May 2016 visit was an opportunity to ascertain the stability of the plant. “The Songloulou power plant plays a key role in the country’s power grid. I was specifically mandated by the President of the Republic to come and appraise the actual situation of the plant as we had received allegations of the presence of cracks that could damage it with a high risk of collapse.
The first phase of the Songloulou plant went operational in 1981 and the first cracks were identified 6 years later, in other words in 1987. Experts then attributed them to a chemical reaction. Eneo has taken measures to remedy the situation, which is reassuring”, Basile Atangana Kouna remarked. “The GM and his team”, he went on, “have explained that the dam is stable and that these cracks do not, in anyway, undermine the stability of the dam. We were also made to understand that the Songloulou dam was not being maintained. This visit has enabled us to see first-hand the contrary, the dam is properly maintained and Eneo teams are even currently at work. Eneo GM explained that because these cracks were an eyesore, a plan to remedy them has been envisaged under the emergency plan. In a nutshell, Eneo will rehabilitate the Songloulou dam to the tune of CFAF 11 billion. I would like to reassure public opinion that there is no risk of collapse at Songloulou”.

About the Songloulou Hydroelectric Plant 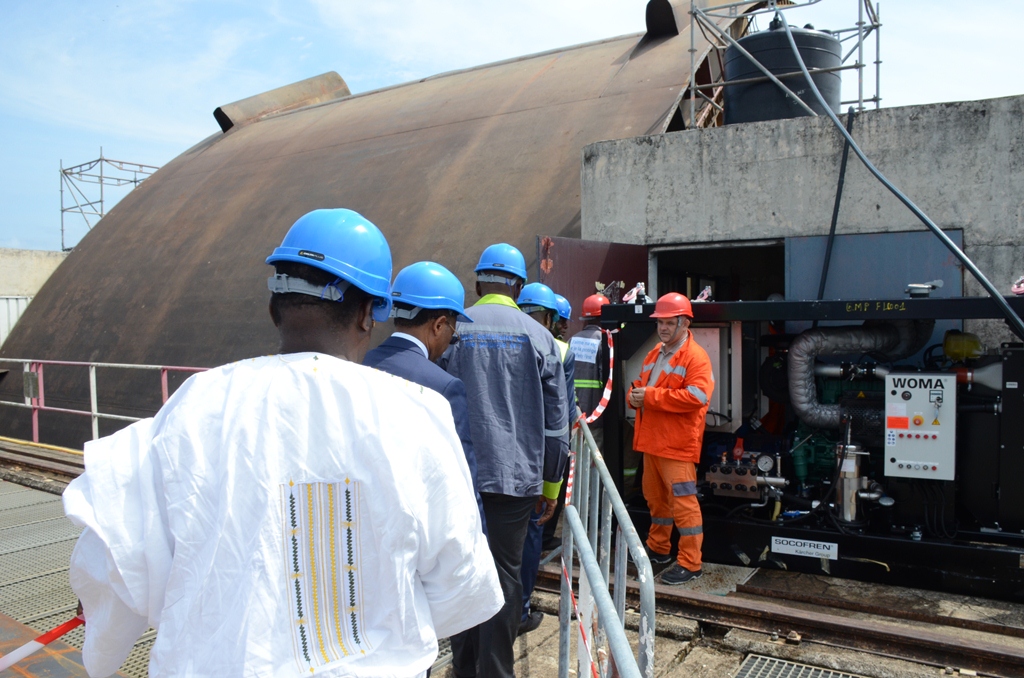