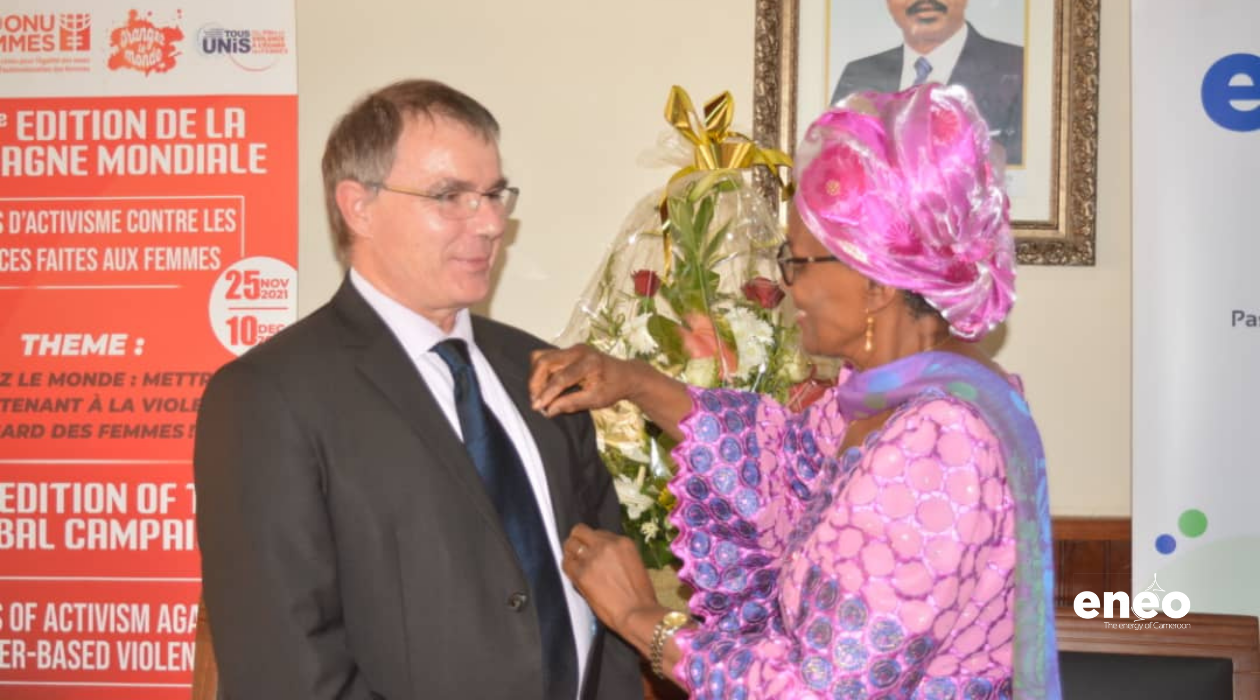 Yaoundé, 14 December 2021 - Eneo Cameroon announces the appointment of its General Manager, Eric Mansuy, as a HeforShe Ambassador by UN Women. In this capacity, Mr. Eric Mansuy accepts to further commit himself to gender promotion.

As part of this promotion, Eric Mansuy was received by the Minister of Women's Empowerment and the Family, Marie Thérèse Abéna Ondoa, on Tuesday 14 December 2021 at 2pm in the presence of the UN Women Resident Representative in Cameroon. During this ceremony, Eric Mansuy received the accolades of the position.

As a HeForShe ambassador, Eric Mansuy responded to the invitation of UN Women to stand in solidarity with women to create a vibrant, visible, and united force for gender equality. "Conscious of the fact that MINPROFF is the guarantor of the national strategy to support women's involvement in decision-making, we are seeking its support to strengthen the promotion of gender within Eneo and to project the company externally as a major player at the national and international scene in the areas of diversity and inclusion," says Eric Mansuy.

For almost a decade, Eneo Cameroon has been in the process of transformation, which is driven by several factors, including the promotion of gender. This approach is based on a "Diversity and Inclusion" policy and committee.

Eneo is convinced that the contribution of women is essential to the success of the company and the achievement of its objectives.

The face of our company has been transformed with women increasingly being represented at all levels of the company. Firstly, in an organic way, with women who have distinguished themselves individually by their talent, and then in an organised way with an identification and empowerment process conducted by both top management and other women leaders in the company.

Out of a total 3,700 employees, the representation of women now stands at 26%. This is an increase of 2 points over 4 years.

Among the executive staff, the representation of women has increased from 14% in 2018 to almost 21% to date.

If we look at the main areas of our business, which are Technical, Commercial and Support, we note that the representation of women is 7%, 51%, and 33% respectively. You can therefore understand the urgent challenge we face: increasing the number of women in technical teams. The actions that have been identified to reverse this trend will form the core of Eric Mansuy's roadmap as HeForShe Ambassador.

His roadmap will focus on the following key points:

Above all, Eneo Cameroon's objective is to promote and guarantee the development of ALL its human resources. Regardless of origin, religion, age, physical condition, and especially gender.

The ceremony in pictures

Download the PDF version of the briefing note here

A driving force in the electricity sector and a catalyst for growth in Cameroon, Eneo Cameroon's mission is to provide reliable energy and quality service, while positioning itself as a model for governance in Africa. Based on the values of integrity, cohesion, respect and commitment, since 2014, the company has safely connected over 700,000 new families and industries. At the end of June 2020, the rate of access to electricity in Cameroon was 63% compared to 49% in 2013. With an estimated workforce of 3,600 employees, Eneo Cameroon is a public-private partnership company that generates and distributes energy in Cameroon.