Eneo invests for improved service quality: 2021 or time to accelerate

During the past year, Eneo has accelerated the implementation of its investment plan, thanks to the mobilisation of 100 billion CFA francs on the local banking market. This has had a positive impact on the customer experience in terms of service continuity (+18% compared to 2020). After a difficult start of the year and despite an unfavourable natural condition in the North, Eneo has recorded an overall improvement in the supply-demand equation and the stability of its distribution network.
Letters of appreciation for the improved service quality issued by authorities and elected representatives, a significant drop (more than 50%) in the number of power cut-related complaints from household and business customers.
These are the early results of Eneo Cameroon's investments, which have been accelerated since the beginning of 2021 with the raising of 100 billion CFA francs on the local banking market. This customer perception is aligned with the improvement of key indicators for evaluating service quality. An 18% decrease in the duration of outages compared to last year. A 16% decrease in the frequency of outages. This underlines the gradual strengthening of actions on the network since March-April, which are probably the most difficult months of 2021, with a drop in service quality. The actions carried out by Eneo in application of its investment plan are essentially:

These global investments to improve service continuity as a whole, and AFCON projects, encourage us to look forward to the continental football competition with optimism. However, there is no such thing as zero risk and there are still fragile areas in the electricity system (generation, transmission and distribution), so Eneo Cameroon is preparing for AFCON with the utmost vigilance and mobilisation. Since October, the company has set up a task force in charge of coordinating its generation, maintenance and operation activities. This special team oversees the management of maintenance operations, the latest security or network reinforcement projects and organises reinforced monitoring of the segments of the electrical system under Eneo's control.

Eneo's 2021 investment in generation
In 2021, Eneo contributed 70% of the energy served to households and businesses in Cameroon. The remaining 30% is generated by independent producers and the Memve'ele power plant operated by EDC.
The supply-demand balance was relatively maintained in the Southern Interconnected Network, whereas in the North Interconnected Network, the unfavourable water shortage resulted in a generation deficit at Lagdo and in the North, where emergency investments only reduced the rationing resulting from this situation.

What did Eneo achieve in the area of generation in 2021?
In RIN

In RIS
Eneo continued to work on extending the lifespan of the Songloulou hydroelectric dam (phase 1)
Within this framework, work continued on the installation of a modern monitoring system. This device is intended to improve the monitoring of the dam by installing new equipment and rehabilitating existing non-functional equipment.
In addition, operations to treat cracks and rehabilitate valve equipment are continuing.
It should be recalled that recent studies have shown that the Songloulou facility is stable. Work is in progress and phase 2 to will start soon.

Renewable Energies
In order to support the government in its plan to develop renewable energies and reduce greenhouse gases, Eneo has committed to:

Eneo's investment in the distribution in 2021
Pole replacement programme
For 2020 and 2021, the objective was to replace 90 000 wood poles with a mix of new wood, concrete and metal poles. In 2020, Eneo replaced 34 000. In 2021, the programme was accelerated and by the end of September 2021 we had already replaced 83 000 poles. With a monthly average of 5 000 poles in 2021, Eneo is projecting a performance of more than 90 000 poles by the end of 2021.
This is a programme that will continue in 2022 and beyond. The rate of production of concrete poles in the local industries whose creation Eneo has stimulated should increase despite a sharp increase in the price of inputs (iron and cement). 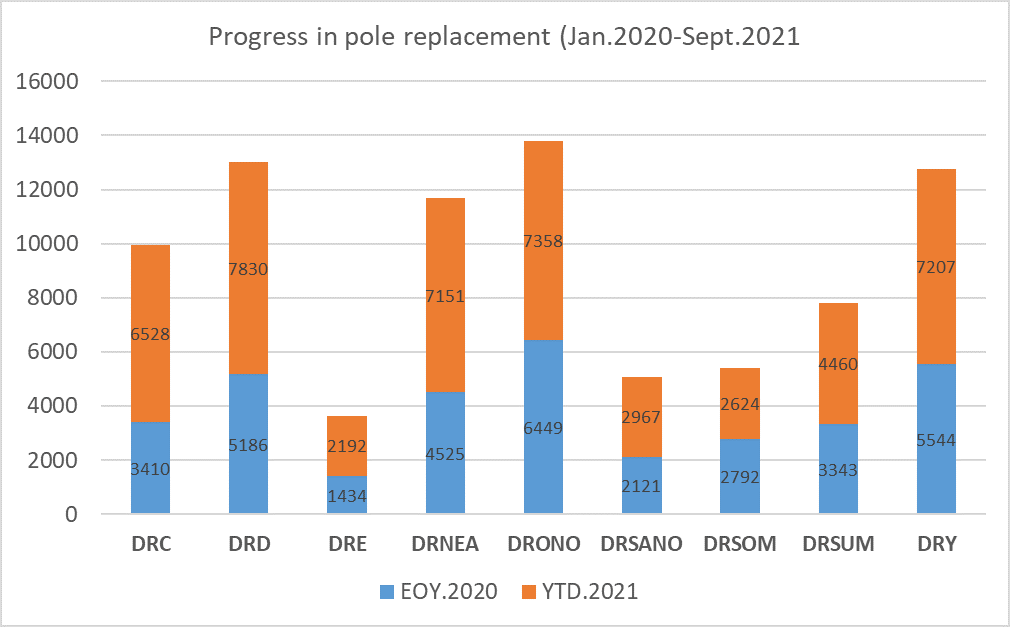 Controlling overgrown vegetation along the line corridors
The programme to reopen major and secondary line corridors in rural areas is continuing either with bulldozers for deep cleaning or with common initiative groups for seasonal cleaning. Objectives: keep the line corridors clean, facilitate accessibility and allow faster interventions, reduce the number of interruptions in rural areas.
These objectives have been achieved wherever the programme has already been implemented: from more than 15 interruptions per month, sometimes resulting in outages lasting several days, to less than 3 interruptions with outages due to vegetation lasting less than a day on average in Ayos and Akonolinga, where the lines have been cleaned with bulldozers. More than 1313 km of line corridors have been cleaned with these machines since 2019 in various regions of the country in the southern part.
In the north, the programme consisted rather in the cleaning of the feet of poles by the CIGs in order to avoid bush fires. 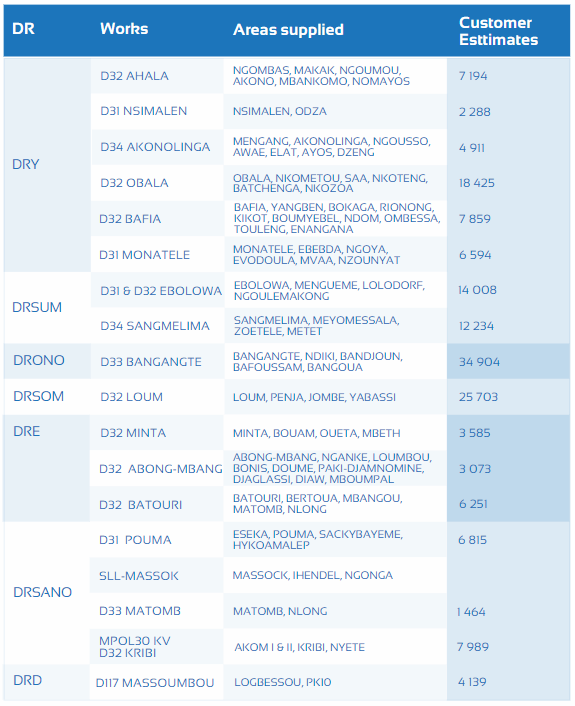 Rehabilitation of underground lines
In order to strengthen the redundancy and flexibility of the distribution network for better energy transmission, the programme to rehabilitate the underground networks that have been unavailable for a long time has been launched. In 2020, 20 km of new underground cables were installed in the networks and commissioned in Yaoundé and Douala. In 2021, 32 km are executed.
Extensions and reinforcements of MV/LV networks in various regions (2020/2021)
250 km of new lines created in the different regions to improve access to electricity for more than 100 000 people.
In addition, more than 350 km of power lines have been rehabilitated to provide power to or strengthen the continuity of service in about a hundred localities in the South, the Sanaga Maritime and Adamawa.

Revitalisation of substation maintenance and renewal of essential switching equipment
Specialised teams (recruitment and training of entirely local personnel) were set up to take over this highly technical activity. The distribution components of the large source substations were maintained in 2020 and 2021. In addition, Eneo has undertaken to replace the essential cubicles in the distribution substations in the neighbourhoods. The programme, which began in Douala and Yaoundé, saw the installation of 330 new cubicles in 2020 and 550 new cubicles in 2021. 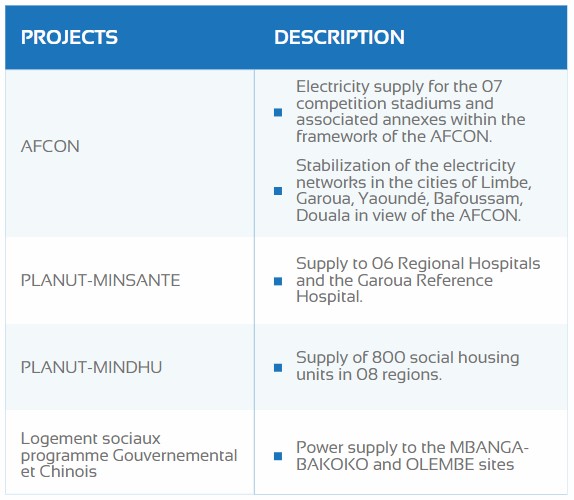 Commercial Actions
At the end of October 2021, the number of active customers rose to 1 643 885. This number has been increased by the 160 000 new active customers recorded since the beginning of the year, 76 000 of whom are the result of new connections and the rest of whom were converted from illegal consumers.
In the meantime, Eneo has 230 000 customers who have adopted the prepaid system.