The Minister of Economy, Planning and Regional Development (MINEPAT) has joined the campaign "I share the energy of Cameroon", today, May 31, 2016, at the solemn opening of the GICAM Business forum. Drawing from the Charter on the "10 Energy-Saving Commitments," he had this to say: "Let there be light ..."

Louis Paul Motaze was accompanied by Madeleine Tchuente, Minister of Scientific Research and Innovation, Members of the GICAM Executive Board and several other government officials and leading businessmen. After a brief summary of the concept by teams from the Eneo Marketing and Communication Department, the Minister of Economy, Planning and Regional Development (MINEPAT), did not hesitate to sign the Charter on the 10 Energy-Saving Commitments, thereby adding his voice to this very important campaign by our company. In addition to the signature, the Minister sent out a very complex message on the charter: "And let there be light ...". This message alone was enough to trigger a sustained round of applause from the official who accompanied him. "It is written in the Bible," commented Louis Paul Motaze, with a smile.

"Let there be light ...", in Latin "Fiat Lux", is a Latin phrase in the first verses of Genesis. This was the first word by God, a command which He gave when creating the world. The complete sentence is: Fiat lux, et facta est lux, "Let there be light and there was light."

Before Louis Paul Motaze, another key voice was added to our Charter. It was by Alain Blaise Batongue, Executive Secretary of GICAM, acting on behalf of André Fotso, President of the leading Employers Union of Cameroon, who was unavoidably absent. Through this important gesture, GICAM is committed to supporting our energy-saving campaign, by sensitizing members on the sparing use of energy.

Launched since March 17, 2016, the national awareness campaign on energy saving, called "I share the energy of Cameroon" aims to bring all sectors, including businesses and individuals, public services such as councils, to use energy rationally. The main idea is to share this common commodity, electricity, among the largest number of people nationwide. The ultimate goal is to get customers to understand how their daily piecemeal efforts can help in saving energy. 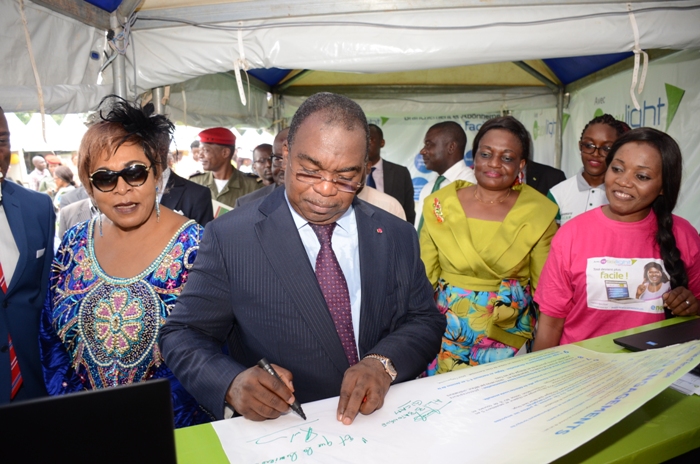