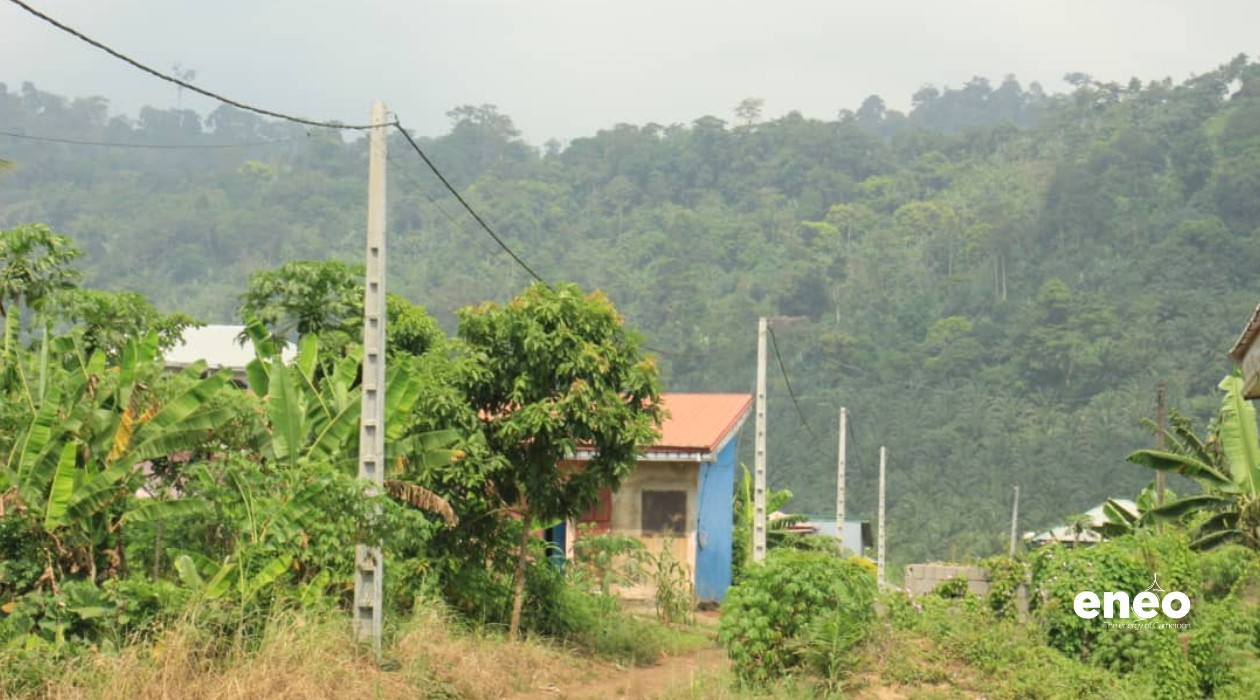 Since 2020, Eneo Cameroon SA has embarked on a vast investment program that aims at stabilizing the network in the South West Region, as well as improving the quality of the electrical service in the Region. In addition to the construction of several new electrical lines and the rehabilitation of old lines, the electrical grid in the South West Region has experienced an upgrade with the planting of some concrete poles in replacement of wooden poles.

On the main Medium Voltage line, there have been 620 concrete poles implanted this year alone, and 1242 damaged wooden poles replaced with new ones. On the Low Voltage distribution network, there have been 1370 pole replacement ventures executed, so as to make the network more stable and available.

Furthermore, existing lines have been kept in good operational condition with the employment of 9 local Common Initiative Groups (CIGs) as partners in the network maintenance effort, carrying out operations of pruning and clearing of lines from overgrowing vegetation, and clearing of the foot of wooden poles to reduce the destructive impact of bush fires on power supply lines.

Some major projects currently going on in the South West Region, include:

In 2018, the line to Kumba from the Njombe power substation, which supplies 8 megawatts of electricity to the municipality of Kumba (that is, 75% of the electrical needs of the town) was vandalized, with the destruction of 2 triphasic transformers of 160 KVA, 5 monophasic transformers, 104 poles, 43000 meters of cables, more than 400 isolators and 225 chains for 30 kilovolts transmission.

Right now, the line is being rehabilitated and works are at an advancement rate of 70% completion.

Once this line is completely restored, the people of Meme Division will once again enjoy good quality electricity supply.

Since the damage inflicted upon the supply line from Njombe through Tombel into Kumba, the electricity consumption of the people of Meme has been entirely and totally dependent on the availability of the transmission line that stems from the Mile 2 power substation, passing through Tiko and Mutengene, then Miles 14–18, Muea, Ekona, Muyuka, Yoke, Balangui and all localities along the Buea–Kumba highway, and making its way right down to Kumba.

The supplementary load of the power demands of all the customers that were initially supposed to be supplied via the Njombe–Kumba line, has put a very heavy strain on this D33–Tiko line, thereby seriously affecting the quality of service in the entire Fako and Meme divisions.

In order to make the line more stable and capable of supporting the increased power load that all the Meme localities have brought upon it, reinforcement works are being carried out right now, which consist of replacing the current 34mm2 cables on the line with thicker and denser cables of 93mm2 dimension.

Also, 65 wooden poles are being changed and replaced with concrete poles, in the first of a two-phase operation aimed at reducing the incidence of power interruption, due to fallen poles, along that line.

Then there are the works to decongest the line, which will see the displacement of more than 10 transformers from under the line. This too will help reduce the amount of tension on the line and increase its stability.

Finally, there are 6 additional air-switch posts being constructed on line, so as to improve the security on the line and reduce to the minimum possible, the number of clients that can be affected by each power cut.

Since the advent of the socio-political crisis in the English-speaking regions of Cameroon, the towns of Limbe, Buea and Tiko have experienced an explosion in population influxes, given their reputation of being much more calm and stable than the rest of the townships in the 2 Anglophone regions. This has led to the rise of many densely populated suburban quarters, which have dramatically increased the demand for electricity in these towns and put a strain on the local network infrastructure in these areas.

In order to meet this new and increasing demand for power, and also provide the population with a more reliable and consistent supply of energy, Eneo has embarked on the construction of 7 new power lines to extent the urban networks in these towns.

These extension projects are situated in Limbe (Mile 2, Mile 4, Mokindi Omnisports – Left side, Mokindi Omnisports – Right side, and Wovia), Buea and Tiko, and they consist of increasing the Medium Voltage network by 9,640 meters of line, and the Low Voltage network by 19,880 meters of distribution lines. Also, there are 10 new transformers of 160 KVA capacity being installed on the 30 Kilovolt lines, which guarantees that these new quarters will have an excellent energy quality being supplied to them, for a very long time.

It is important to note that ALL THE POLES USED IN THESE EXTENSION PROJECTS ARE CONCRETE POLES, which attests to the willingness of the management of Eneo to see to it that the power supply lines are as durable as possible, for the long term.

Each of the 5 stadiums in Fako :

As such, optimal back-up power supply to these structures has been ensured, to the highest extent of human capability.